Laying the insulating pad under the oven chamber

Once the walls cured it was time to lay the oven floor pad and the insulating layer that is below. The insulation pad was poured just prior to the concrete floor pad, so it was vital the the forms be well braced. I also cut the main form in two pieces so that it could be removed through the opening. The supports under the form rest on scraps of wood which can be driven out to allow removal. Before the insulation was poured, we placed flashing around the inside and top of the block wall to provide a break from the pad to the wall, since the pad is not suspended on rebar as in many designs. 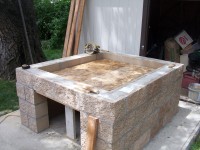 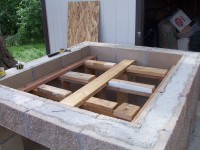 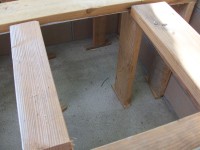 The insulating layer consists of a 6:1 ratio of vermiculite and Portland cement. I found the easiest way to mix it was in a wheelbarrow using a hoe and spray nozzle. Put an inch of water in the wheelbarrow, add the cement, thoroughly mix with the hoe breaking up any clumps. Add water to make a thin slurry, then add vermiculite, mixing with the hoe and spraying to wet it all the way through. The insulating layer is 4" thick. The form for the concrete pad that forms the next layer was then placed. 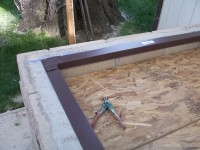 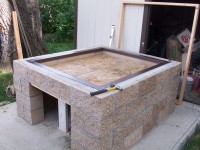 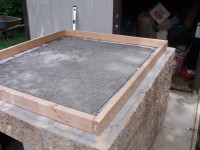