While the oven is heating up, the toppings, dough and sauce are brought out and placed on the assembly table. When we have a pizza party we have guests bring a topping or two to share and their choice of beverage. We supply the sauce, cheese and dough. This system works out very well and results in a variety of toppings. It's great fun to see what kinds of pizza people create, everything from simple pizzas to stuffed crust pizza and calzones. Dessert pizzas are also very popular. 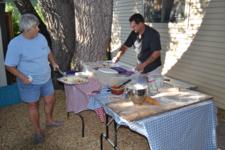 The dough is rolled out on a large cutting board, then placed on a peel before the toppings are added. Make sure you use plenty of corn meal on the peel, otherwise when the pizza is being slid into the oven the crust will stick and the toppings end up on the oven floor. 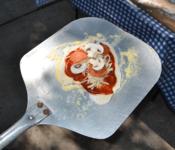 A small fire is kept burning in the oven while cooking pizzas. This maintains the temperature in the chamber. Some people have the fire on one side of the oven, I like to have mine at the back, it's just easier to push the ash and fuel to the rear than to the side. 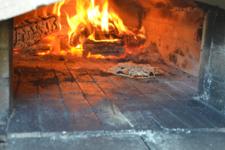 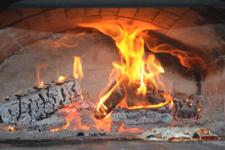 Before sliding the pizza onto the oven floor, use a natural bristle broom to sweep the ash to the rear of the oven. Just a word of warning, the broom will catch fire at some point and it burns fast! I learned the hard way that you need to keep an extra broom on hand. A garden hoe works very well for pushing the fire to the back before sweeping, and also for removing burnt pizza toppings from the oven floor.

Slide the pizza off the peel with a few quick shakes. It takes a bit of practice, after a few dozen you will get the hang of it. Give them a turn or two to cook them evenly since it's slightly hotter on the fire side. Our average cooking time is 5 minutes or so. Lift the edge of the crust with the peel to check for doneness. 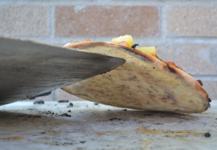 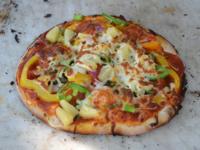 A few tips on pizzas:

When rolling out the crust, roll or toss it to a thin crust. Since the oven is 7-800 degrees, the pizza cooks very quickly and if the crust is too thick it will end up chewy instead of crisp.

Use toppings, sauce and cheese sparingly. If the toppings are too thick the middle will not cook since the pizzas cook so quickly. If you are that hungry make a second pizza.

The pizzas we make are about dinner plate size, which are easy to make and eat. They also fit the peels nicely. Each pizza uses a ball of dough fist sized or smaller.

The dough recipe is from the Fornobravo website. We experimented with several different recipes before deciding that this was the best one. It also uses less yeast than other recipes so it saves money on dough. For an average party we will make two double batches of dough which equals two kilograms of flour, or about five pounds. Dough can be frozen if not used.

I use a Kitchenaid stand mixer to mix the dough. The mixer will handle a kilogram of flour at a time. If you are making much dough, buy your flour in 25 lb bags and buy the yeast in jars, not envelopes. Also, buy a scale and weigh the ingredients instead of using measuring cups; it's much simpler and more accurate, especially when you need to increase the amount being made. You don't have to learn the metric system, however measuring in grams is much easier than pounds and ounces.

It's not uncommon to make 50-100 pizzas during a party. Once people find out you have a brick oven they will be back whenever you invite them. We have found that it is a fantastic way to spend time with friends.